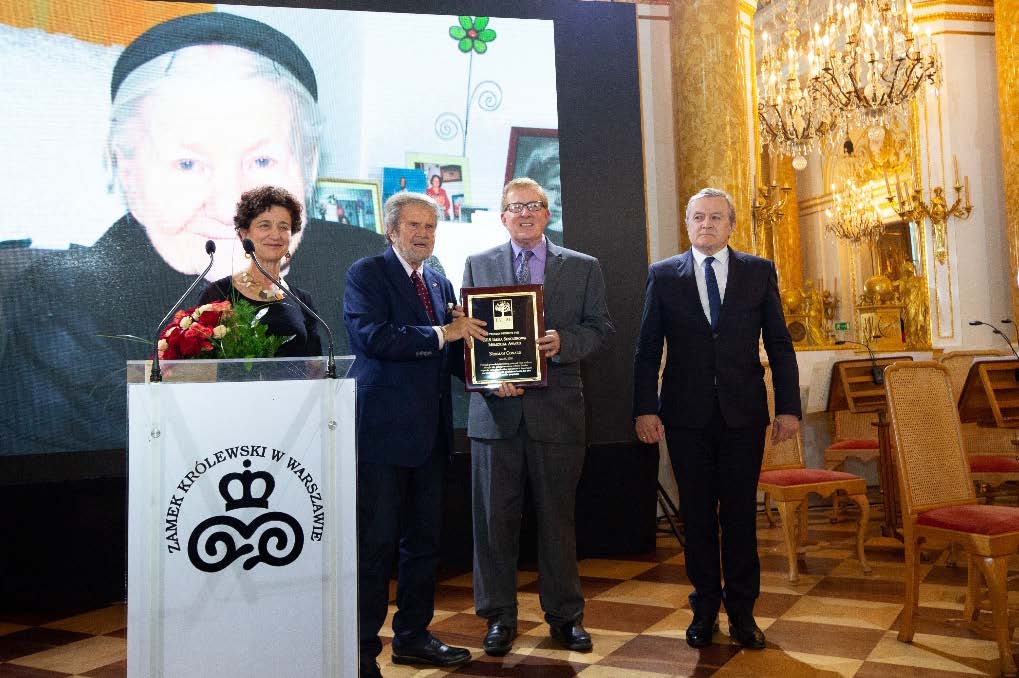 WARSAW, POLAND – On June 11, 2018, San Francisco-based Taube Philanthropies founder Tad Taube and Polish Culture Minister Piotr Tadeusz Gliński presented the 2018 Irena Sendler Memorial Award to Norman Conard, a renowned educator from Kansas who, together with his high school students, brought the untold story of Irena Sendler to public view, illuminating her historical importance and enabling the world to celebrate her anti-Nazi activism in her own lifetime and in perpetuity. Conard is the first American to receive the award.

Norman Conard’s June 11, 2018 acceptance speech of the Irena Sendler Memorial Award is available on the final page following this release. Photos from the event are available here.

The Irena Sendler Memorial Award was created in 2008 by Taube Philanthropies in memory of Irena Sendler whom Yad Vashem named a “Righteous Among The Nations.” Each year, in commemoration of the May 12 anniversary of Sendler’s passing, the award is presented to Polish citizens who have been exemplary in preserving and revitalizing their country’s Jewish heritage. Nominations for the annual award are reviewed by a panel of Taube Philanthropies advisory board members and Jewish cultural leaders in Poland. For more information about Sendler, the award, and previous recipients, visit: http://nagrodairenysendlerowej.pl/

Thank you. There are many people who have impacted history, in extraordinary ways. Irena Sendler stands out because of her incredible courage and undying love for children. ‘People caring about others’ was her mantra, understanding the need to ‘repair the world,’ was her motto.

I salute the Taube Philanthropies and the Ministry of Culture for the Country of Poland, for their wonderful desire to ‘preserve Jewish heritage and to help renew Jewish culture in Poland.’ Many years ago there was a thriving Jewish life in this country. May that again be the case, as awards like this bring out heritage and history. The two entities involved with this ceremony both believe in the future of the Jewish people in Poland.

Almost 20 years ago, a project began in Kansas, which would change many lives. It would also lead to a close personal relationship for my students and myself, with Irena Sendler. It was our privilege to travel to Poland and be with Irena on five occasions. These times with her would be filled with laughter, with tears, and with a transparency from Irena that would transform everyone in the room. She also would share many, many rich thoughts and wishes. Until her death in 2008, she constantly spoke out for those people who were downtrodden and would say again and again, that we must respect all people, regardless of race, religion or creed.

As stated many times by Irena, her one regret in life was not being able to rescue more children. She also would want me to say, that these rescues were done by her network of over 25 people, always being humble and giving credit to them. She would always give the names of those in this brave, powerful, and passionate network, who assisted her in the rescue, hiding, and care of these children and adults from the Warsaw Ghetto and the streets of Warsaw.

It is a beautiful honor to be here and share about Ms. Sendler and to also be recognized by the Polish government and the Taube Philanthropies. But I also stand here representing 3 high school students in Kansas and many other students and adults who have shared her story with the world. For Megan, Liz and Sabrina, I say, “Job well done,” but there is much more in the process of repairing the world. To Bieta, Renata and other child survivors, I say, “Your love of sharing Irena’s story has made a tremendous impact on Poland and the world.” To those presenting this award, I say, “Your honoring of courage and valor is so appropriate in our day and time. Her story is needed as much today, as ever before.

In the performance of Life in a Jar, there is a line that says, “Irena Sendler was a light, a spiritual
light in the darkness. She repaired the world, one child at a time, and made a difference.”