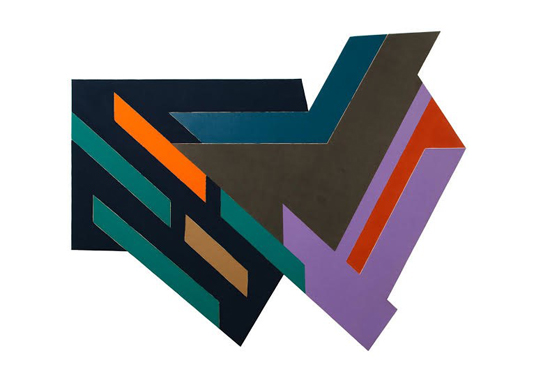 SAN FRANCISCO – Frank Stella’s Polish synagogues series will have its European premiere at the POLIN Museum of the History of Polish Jews in Warsaw, on February 19 through June 20, 2016. The internationally renowned American artist will travel to Poland for the first time to speak at the exhibition opening.

“Frank Stella and Synagogues of Historic Poland” showcases more than 40 large-scale wall reliefs from Stella’s Polish Village Series, inspired by the classic, 18th-century wooden synagogue structures of eastern Poland, which are documented in Wooden Synagogues by Maria and Kazimierz Piechotka (Arkady, 1959). Generated in phases from 1970 to 1975, Stella’s wooden synagogue works of abstract art have garnered international acclaim wherever they have shown.

“Hosting this exhibition of the magnificent works of a world-renowned artist is a coup for the POLIN Museum,” said Taube Philanthropies Chairman Tad Taube. “The Museum is the ideal place for Frank Stella’s exploration and interpretation of Poland’s historic wooden synagogues, and we expect the exhibition to draw attention from a global audience interested in art, history, and Jewish life past and present.”

The works selected by POLIN curator Artur Tanikowski, in direct collaboration with the artist, will be installed at the Museum as an exposition of “work in progress.” To illustrate this concept, Stella’s works included in the exhibition encompass preparatory sketches, dimensional drawings, monochromatic wood models for the reliefs, their maquettes in corrugated cardboard, and capping the creative process, the painted, irregularly shaped large wood reliefs. Directly complementing the works on display, the exhibition also includes drawings and archival photos of the synagogues that inspired the reliefs, as well as recent prints and reproductions. The result is a fascinating overlap and interplay of two seemingly distant worlds – that of the Polish wooden synagogue and modern American art.

A graphic presentation of the chronology will interpret the three fundamental motifs of the exhibition – the history of the cataloguing of the wooden synagogues, the contribution of the authors to this endeavor, and the creation of Stella’s Polish Village Series, as well as his other works thematically entwined with Jewish culture and religion.

The exhibition is accompanied by the close-to-scale reconstruction of the roof and painted ceiling of the 18th-century wooden synagogue that once stood in Gwoździec, now a permanent installation at POLIN Museum and the centerpiece of its Core Exhibition.

Stella greeted special guests of the exhibition at an Opening Gala at the POLIN Museum on February 18 and delivered a keynote presentation on February 19.