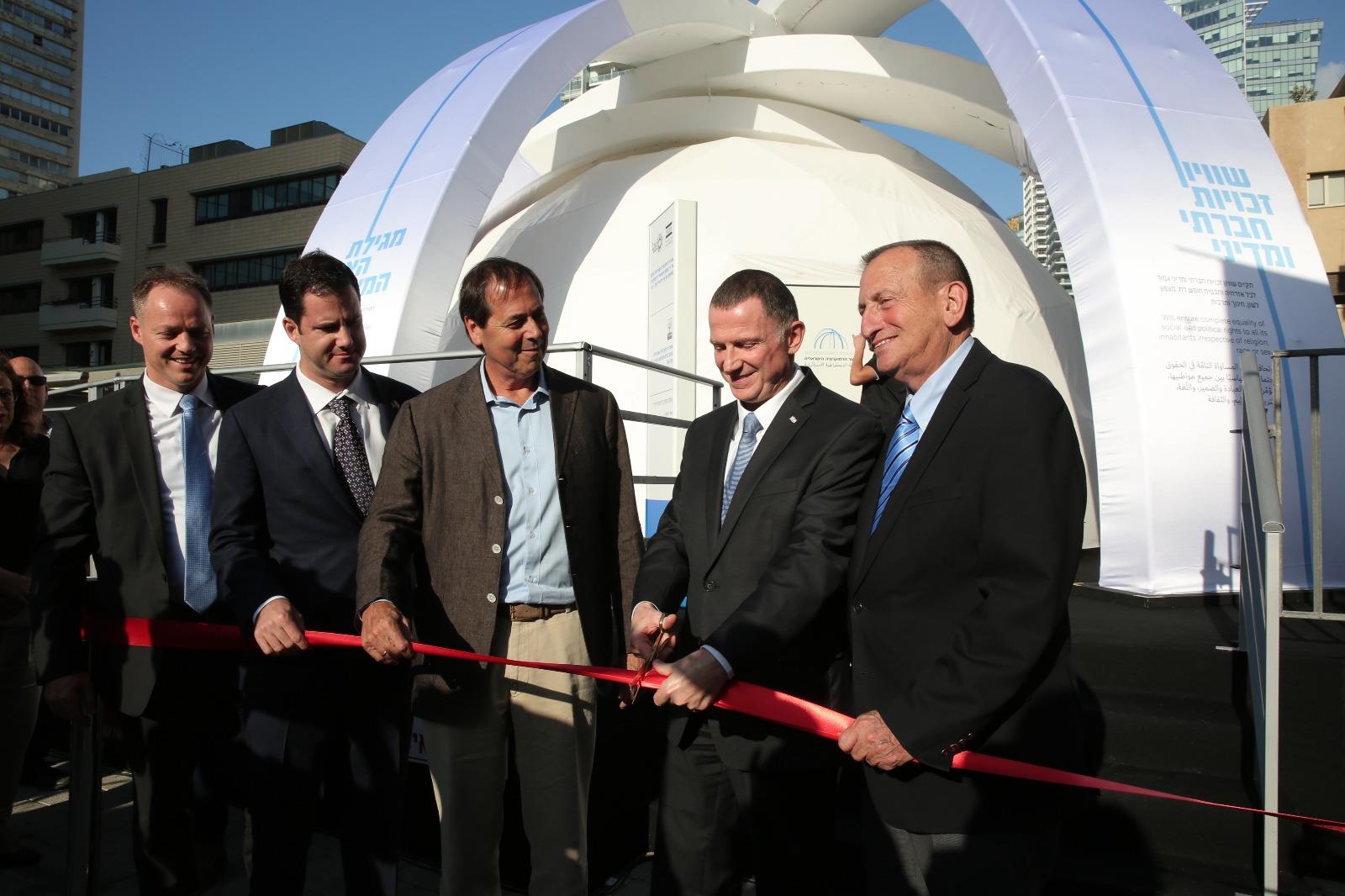 The Democracy Pavilion is a unique multi-media experience, in full 360-degree technology, showcasing the values embedded in Israel’s Declaration of Independence and the historic highlights of 70 years of independence. This project was made possible with a lead gift by Taube Philanthropies, and through a partnership between the IDI and City of Tel-Aviv. Located at 1 Rothschild Plaza, Tel-Aviv, the Democracy Pavilion will open to the public on Independence evening until the end of the year.

MK Edelstein said: “As the Speaker of the Knesset, I see how, as time goes by, the fault lines in Israeli society deepen, exacerbating the tensions between Jewish and democratic concepts, intensifying the differences between liberals and conservatives and distancing Israel from the rest of the world. It's true that Israel’s independence was achieved through leaps and bounds, but we still face many obstacles. The Declaration of Independence reminds us that our past, present and future cannot be separated. It also reminds us that we have many common goals, which are more important than a common way of reaching these goals. That is the key to the mutual values found in the Declaration of Independence. Today, with the help of the Democracy Pavilion, we wish to return to the spirit of “togetherness”, which was captured on this Tel Aviv Boulevard 70 years ago. It is up to us to make sure that this happens”.

Ron Huldai, Mayor of Tel Aviv-Yafo Municipality: "The establishment of the Democracy Pavilion is an impressive demonstration of Israeli democracy- located in the first modern Jewish city, which was dedicated to democracy from the very beginning. Only in a democratic society can freedom and tolerance co-exist. This is what allows the opposing sectors of Israeli society to co-exist – and together create Tel- Aviv’s multi-cultural mosaic. It is here that artists are free to express themselves without fear. Democracy is a way of life and the Democracy Pavilion represents the connection between the city and its democratic values”.

Yohanan Plesner, President of the Israel Democracy Institute: "The basic values of the Declaration of Independence are at the heart of national consensus and must be preserved - this is the motivation behind the Democracy Pavilion. This initiative, open to the general public, aims to strengthen shared values”.

Plesner added that "the Declaration of Independence is one of the fundamental elements that shape Israeli identity, and that despite the internal and external threats, enables all citizens of Israel to live together and feel optimistic about the future of the state. Israeli democracy is a miracle, which has thrived for 70 years, notwithstanding wars, terror and internal struggles. It must be defended and not taken for granted, to ensure that Israel will continue to exist as a Jewish and Democratic State”.

Sean Taube of Taube Philanthropies: “Israelis have overcome tremendous odds, made the desert bloom, absorbed millions of immigrants, created a thriving first-world economy, and founded a flourishing democracy in a sea of authoritarian hostility. As was the goal of the City of Tel Aviv and IDI, we believe the Democracy Pavilion, a symbol of cultural pride will be a magnet for visitors from both Israel and globally”.

On Israel’s 70th anniversary, May 18, 2018, the Israel Democracy Institute in partnership with the Tel Aviv-Yafo Municipality will open to the public the Democracy Pavilion - a unique multi-media experience, in full 360-degree technology, showcasing the values embedded in Israel’s Declaration of Independence. Visitors will be invited to sign the Declaration of Independence, reaffirming their commitment to its values. The structure, a large geodesic dome at the heart of 1 Rothschild Plaza, conveys the values of equality and freedom and highlights the pluralism and diversity that characterize Israel’s democracy. Quotes from the Declaration of Independence are embedded on the arches surrounding the Pavilion.