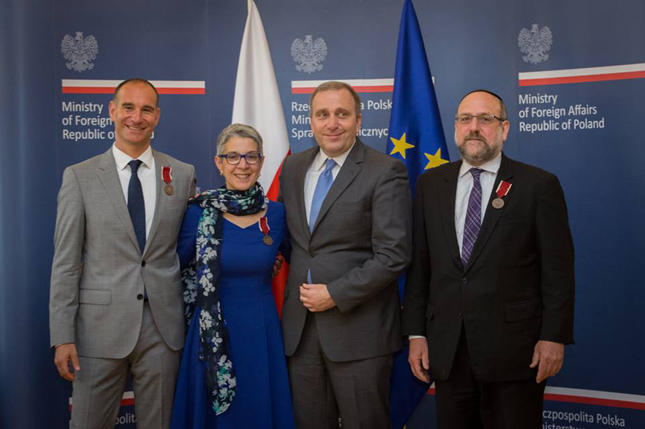 WARSAW – The director of the Taube Center for the Renewal of Jewish Life in Poland – Taube Philanthropies’ Warsaw branch – was yesterday awarded the prestigious Bene Merito Medal by the Polish Minister of Foreign Affairs Grzegorz Schetyna. Helise Lieberman was honored at a ceremony at the Foreign Ministry together with fellow honorees Chief Rabbi of Poland, Rabbi Michael Schudrich, and Executive Director of the JCC Kraków, Jonathan Ornstein.

Each recipient received a medal and a plaque that reads, “For a friend of Poland in recognition for contributions made to the promotion and strengthening of the Republic of Poland on the international arena.”

At the ceremony, Minister Schetyna thanked Lieberman, Schudrich and Ornstein for their contributions to advancing Polish-Jewish relations.

Lieberman has been engaged in Jewish educational and communal work since graduating from Brandeis University in 1979. As director of the Taube Center, she oversees Taube Jewish Heritage Tours, an educational tour program providing custom-made Jewish cultural tours to individuals, families, and groups, and Mi Dor Le Dor, a Jewish learning and leadership program for young professionals in diverse fields of Jewish education. Previously, she served as founding director of Warsaw’s Lauder Morasha Day School, as associate director of the European Association of Jewish Community Centers, and as program director at several Hillel Foundations in the New York metropolitan area. Lieberman has been a consultant to the Rothschild Foundation (Europe), the Westbury Group, and the POLIN Museum of the History of Polish Jews, which celebrated its grand opening in Warsaw late last year. She participated in the Melton Senior Educators Program in Israel in 2007-08.

“Since joining us in 2009 to lead our outreach in Warsaw and greater Poland, Helise has been an incredible asset,” said Tad Taube, Chairman of Taube Philanthropies. “Her dedication to the revival of Jewish life in Poland is unmatched. She has a deep knowledge of Polish Jewish history and a rich understanding of contemporary life from which thousands of visitors and Polish natives have benefited. We are so proud that the Polish Ministry of Foreign Affairs has honored her.”

The ceremony was attended by Polish dignitaries, representatives of the U.S. Embassy in Poland, and officials from Poland’s Jewish community, including Dr. Sebastian Rejak, Special Envoy of Poland’s Minister of Foreign Affairs for Relations with the Jewish Diaspora; Dr. Pawel Spiewak, Director of the Emanuel Ringelblum Jewish Historical Institute; Piotr Wislicki, Chairman of the Association of the Jewish Historical Institute of Poland; and Anna Chipczynska, President of the Jewish Community of Warsaw.

Taube Philanthropies was established in 1981 by its founder and chairman, Tad Taube. Based in the San Francisco Bay Area and with an office in Warsaw, the Foundation makes philanthropic investments primarily in the Bay Area and Poland, in scholarship, heritage preservation, arts and culture, education, and institution-building. Taube Philanthropies is committed to collaborative giving for greatest charitable impact and actively partners with individual donors and other foundations. For more information, please visit www.taubephilanthropies.org.