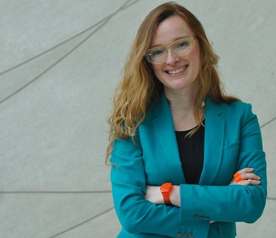 Taube Philanthropies' grantee Natalia Romik, noted Polish architect, curator, and Holocaust researcher, has been selected as one of 2022's nine recipients of the prestigious Dan David Prize, a $300,000 award, for her research, exploration, and analysis of Jewish remnant hiding places in Poland and Ukraine during World War II. One of her best-known scholarly works, "Hideouts: The Architectural Analysis of the Secret Infrastructure of Jewish Survival during the Second World War," is the genesis of a ground-breaking exhibition, which will premiere at the Zacheta National Gallery of Art in Warsaw, March-July 2022 and then show at the acclaimed Trafo Gallery in Szczecin, Poland, from September to December 2022. Taube Philanthropies supported research and curatorial development of the exhibition.

The Dan David Prize has been called Israel's MacArthur Foundation-style "genius grant" for history. On receiving the award, Dr. Romik said, in part, "I feel very honoured to be awarded the Dan David Prize, amongst the group of such an amazing cohort of global scholars. I am sincerely thankful to all my collaborators and friends, without whom this success would not have been possible [especially] the Association of the Jewish Historical Institute, who nominated me for the award ... [Still] I am also deeply troubled, as this positive news comes in the moment of international tragedy on a scale unseen in Europe since the Second World War."

Dr. Romik is not only concerned with Holocaust history and memory. Since the eruption of Putin's war of aggression on Ukraine, where she had recently completed major research, she is helping provide relief to the refugees flooding into Poland. Her reaction to the prize was tinged with this reality: "My thoughts are with Ukraine and its brave people, and with all my heart I wish them victory in their fight. Slava Ukrainie!"

Romik, who received her Doctorate in Architecture from the Bartlett School of Architecture at University College London, has been awarded numerous grants, including the London Arts and Humanities Partnership, and the Scholarship of the Minister of Culture and National Heritage of Poland for the project Jewish Architecture of (Non-)Memory in Silesia. From 2007 to 2014, she cooperated with the Nizio Design studio and was a consultant for, among others, the POLIN Museum core exhibition design, and is co-author of the revitalization of a synagogue in Chmielnik. Romik is a member of the SENNA architecture collective, responsible for designs including the exhibition at the Museum of Jews in Upper Silesia in Gliwice and permanent exhibition at the Brodno Jewish Cemetery in Warsaw entitled “Beit Almin – Eternal Home.” In 2018, she co-curated the exhibition "Estranged: March ’68 and Its Aftermath" at the POLIN Museum of the History of Polish Jews. POLIN Museum's chief curator, Dr. Barbara Kirshenblatt-Gimblett, was a 2020 recipient of the Dan David Prize.

Taube Philanthropies is pleased and proud to join in congratulating her, and we look forward to her future projects.

Read more about the Dan David Prize recipients for 2022 here

Watch a news video by Arte TV (Germany) tracking Natalia Romik conducting field research on hiding places at various sites. (At the top right of the screen, you can choose subtitles in any one of six languages.)