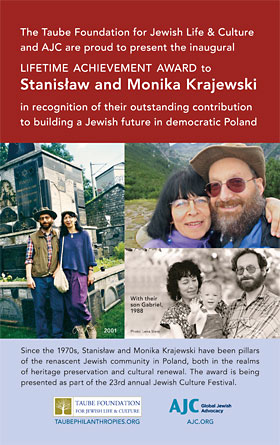 SAN FRANCISCO — The Taube Foundation for Jewish Life & Culture and AJC are proud to present the inaugural Lifetime Achievement Award to Monika and Stanisław "Staszek" Krajewski of Warsaw, Poland, in recognition of their inestimable contribution to the rebirth of Jewish life in Poland. The award, consisting of a beautifully designed plaque and an honorarium in the amount of $5,000, will be presented on Friday, July 5 at the 6 pm concert of the yearly Jewish Culture Festival in Kraków, Poland. The Krajewskis will then be the guests of honor at a Shabbat dinner hosted by the Jewish Community Center of Kraków at Isaac Synagogue.

"In the early 1970s, the Krajewskis and a small group of friends, whom they helped to inspire, comprised the Jewish renewal in Poland. In the '80s, they co-created the intellectual, artistic and communal framework in which Jewish life could grow. In the '90s, they set about building institutions that would ensure the permanence of that renewal. Their personal courage, moral integrity and spiritual depth have set a benchmark few will be able to surpass," said Tad Taube, Chairman, Taube Foundation for Jewish Life & Culture.

"Stanisław Krajewski and his wife Monika have been stalwarts of the Polish Jewish community for years, long before the collapse of Communism allowed for religious freedom to flourish. The Lifetime Achievement Award is a well-deserved recognition of their contributions to the revival of Jewish life in Poland, Polish-Jewish dialogue, Christian-Jewish dialogue, and the preservation of Jewish memory in Poland. At AJC, we are particularly proud that Staszek represented us for years in Poland with consummate skill and dedication," stated David Harris, AJC's Executive Director, and Rabbi Andrew Baker, AJC's Director of International Jewish Affairs.

Stanisław Krajewski and Monika Krajewska were among the first to document Poland's remaining Jewish cemeteries, synagogues, and other Jewish sites since the 1970s. They helped to create the Jewish Flying University, an independent group that studied Jewish issues in the Communist era, and in 1988 were founding members of ​the first Jewish kindergarten in Warsaw since World War II.

Monika, an accomplished artist, published Poland's first album on Jewish cemeteries, and revived the traditional art of the Jewish paper-cut, of which she is a master. She teaches at the Lauder Morasha Jewish School in Warsaw, and gives workshops to adults on Jewish tradition through art.

Stanisław, now a professor of philosophy at University of Warsaw, is the author of several key books on Jewish contemporary history and identity in Poland, including important publications in the 1980s underground era, and today serves as co-chairman, on the Jewish side, of the Polish Council of Christians and Jews.

For more information, photographs, or to arrange interviews, please contact: