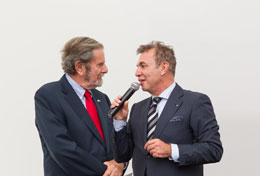 L to R: Hon. Tad Taube and Piotr Wiślicki speak at the reception held in Mr. Wiślicki's honor at the Contemporary Jewish Museum on June 12.

SAN FRANCISCO – On June 12, Bay Area supporters of the Museum of the History of Polish Jews gathered at the San Francisco Contemporary Jewish Museum to honor Piotr Wiślicki, Chairman of the Association of the Jewish Historical Institute. The Association forms one part of a unique public-private partnership in Poland that has joined forces to fund and develop the magnificent new Museum of the History of Polish Jews, built on the sacred ground of the Warsaw Ghetto. The other partners in this innovative enterprise are the Federal Government of Poland and the City of Warsaw.

In mid-April Mr. Wislicki had welcomed a Bay Area delegation of Museum donors to participate in its Ceremonial Opening on April 19, the 70th anniversary of the Warsaw Ghetto Uprising. Enthusiasm for the new Museum, which showcases 1,000 years of Jewish life in Poland, is especially evident in the Bay Area, where supporters, led by Taube Philanthropies and the Koret Foundation, comprise over thirty percent of all American donors to the Museum's Core Exhibition.

Tad Taube, Honorary Consul for the Republic of Poland in San Francisco and Museum Distinguished Benefactor, introduced Mr. Wiślicki, noting that it is "thanks to Piotr Wiślicki's leadership that this new Museum will extend the historical narrative beyond the Holocaust to encompass an epic Jewish history that even today shapes contemporary Israeli and American Jewish life."

Mr. Wiślicki expressed his gratitude to the Bay Area donors for their support and spoke of the importance of the Museum, concluding: "There is no history of the Jews without Poland, and no history of Poland without the Jews. It is in Poland that the largest Jewish community in the world once lived; this legacy lives on wherever Jews live today."

While in the Bay Area, Mr. Wiślicki also attended the San Francisco Opera, met with former U.S. Secretary of State George Shultz, toured the Polish archives at the Hoover Institution, and participated in the closing ceremonies of the Top 500 Innovators Program, sponsored by the Polish Government. The program brings technology and science leaders to Stanford for a month-long intensive program, in partnership with Stanford, Silicon Valley technology companies, and the U.S.-Polish Trade Council.

For more information about the visit, please email: vhannush@taubephilanthropies.org