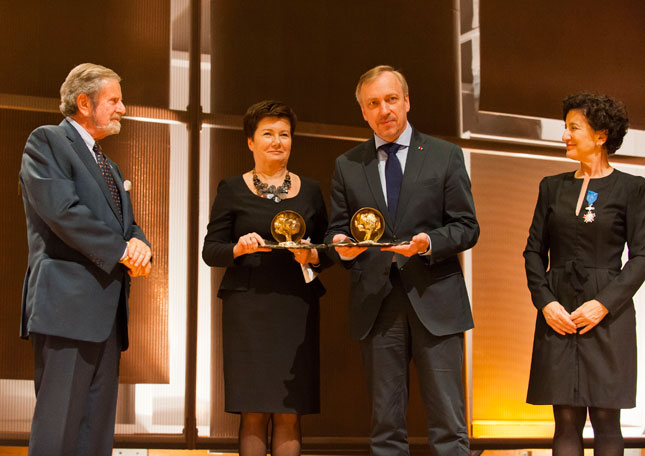 Warsaw, Poland -- The annual Irena Sendler Memorial Award, hosted by the Taube Foundation for Jewish Life & Culture, was held on October 23, at the Museum of the History of Polish Jews. This year’s laureates are Bogdan Zdrojewski, Minister of Culture and National Heritage, and Hanna Gronkiewicz-Waltz, the Mayor of the capital city of Warsaw.

The Irena Sendler Memorial Award, created in 2008 by the Taube Foundation for Jewish Life & Culture, honors the late Irena Sendler, a “Righteous Among the Nations,” who saved hundreds of Jewish children from the Warsaw Ghetto during World War II. The Award is given annually to Polish citizens who have made an outstanding contribution to the preservation of Jewish heritage and the support of Jewish cultural renewal in Poland.

Bogdan Zdrojewski, Minister of Culture and National Heritage, is the official representative of the Polish government in the museum partnership. "We were aware that it was the last moment to preserve the memory of both cultures, fed not only by hundreds of years of suffering but also common joy, tradition, language and identity. I am proud that my ministerial time encompasses this one-of-a-kind act of creation that is this Museum of Memory – the Museum of the History of Polish Jews,” emphasized Minister Zdrojewski. According to him, the Museum of the History of Polish Jews exemplifies how a public-private partnership should function. “This Museum had been discussed for a long time and it’s been realized very fast, inter alia thanks to the fact that private investors, founders and donors are meeting with national treasury institutions and government organizations in order to execute one of the most important historical projects in Poland.”

Since the 2006 elections, Hanna Gronkiewicz-Waltz, the Mayor of Warsaw, has considered the building of the Museum of the History of Polish Jews to be one of the foremost priorities of her term in office and has vigorously supervised its construction on the landmark plot donated by the city. “This is a symbolic location and it was clear to me that Warsaw must be involved in the creation of such a museum precisely in Muranów. I am delighted we managed to create a space that attracts and connects people even at this early stage of its functioning,” said Mayor Gronkiewicz-Waltz, about being recognized for the 2013 Award.

This year’s award, a bronze representation of an apple tree, was designed by artist Hanna Rechowicz, daughter of Jadwiga Piotrowska, Irena Sendler’s friend and fellow partisan. It was in the garden of Ms. Rechowicz’s childhood home where the records with the names of children rescued from the ghetto were buried under an apple tree. In this same house, some of the rescued children had lived for the first days of their freedom before being taken to more permanent placements.

The Irena Sendler Memorial Award has previously been granted to: Janusz Makuch, Director of the Jewish Culture Festival in Krakow, Jan Jagielski, Director of the Historical Documentation Department at the Emanuel Ringelblum Jewish Historical Institute, Aleksander Kwaśniewski, former President of the Republic of Poland, Prof. Dr Maria Janion of the Institute of Literary Research at the Polish Academy of Sciences, Dr Jolanta Ambrosewicz-Jacobs of Jagiellonian University, and Magdalena Grodzka-Gużkowska, a partisan and “Righteous Among the Nations.”

For more information or to receive photographs of the award ceremony, please contact: