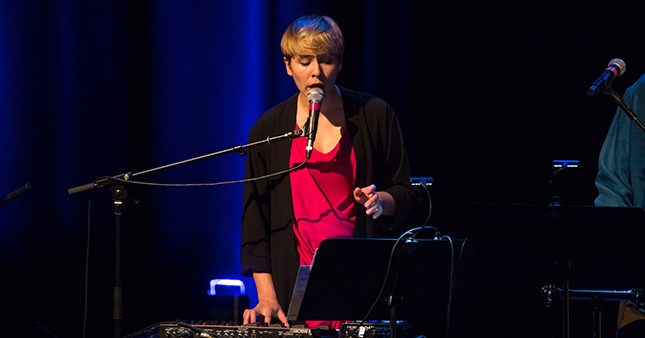 SAN FRANCISCO – Award-winning Polish composer and performer of contemporary Yiddish music Ola Bilińska and her ensemble, Libelid, continued their first-time U.S. concert tour this weekend when they visited the Bay Area on Saturday, December 8, for a free, public concert at the San Francisco JCC. San Francisco-based foundation Taube Philanthropiespresented the concert, as a means to share Bilińska’s music with U.S. audiences. Photos are available at the links provided below.

At the 30th annual Jewish Culture Festival in Kraków earlier this year, the foundation recognized Bilińska’s contributions to Yiddish culture and music by honoring her with the foundation’s 2018 Irena Sendler Memorial Award. She is the first musician to receive the award.

“Ola Bilińska’s acclaimed work has focused on preserving and celebrating Yiddish music through bringing traditional songs, both popular and obscure, back to life by presenting them in modern, compelling forms,” said Shana Penn, executive director of Taube Philanthropies. “In doing so, she honors artists of the past while presenting the wealth of Yiddish culture on the contemporary stage. She is clearly committed to the continuity of Yiddish culture in Poland and internationally.”

On December 3, Bilińska and Libelid, from Sejny, Poland, performed at a Hanukkah celebration at the Polish ambassador’s residence in Washington, D.C. In honor of the 100th anniversary of Poland regaining independence and the 70th anniversary of the establishment of the State of Israel, Polish Ambassador Piotr Wilczek and Israeli Ambassador Ron Dermer came together to host the candle-lighting and concertcelebrating the intertwined cultural, culinary and social ties between their two countries.

“Poland values her Jewish community, and her doors are always open to our Jewish friends,” Ambassador Wilczek shared in his remarks at the Hanukkah celebration. “The Jewish people have been an integral part of the fabric of our society.” Together Ambassadors Wilczek and Dermer lit the Hanukkah menorah.

Also in attendance was Janusz Makuch, director of the Jewish Culture Festival in Kraków, who was the first honoree of the Irena Sendler Memorial Award, in 2008, and the first Polish citizen to receive Israel’s prestigious accolade, “Friend of Israel,” in 2018. Makuch said of Bilińska during his remarks at the Hanukkah celebration in Washington, D.C., “Ola Bilińska is one of the most eminent, talented musicians who discovered for us the treasure of Yiddish music, created and composed mostly in Poland and Eastern Europe. She is living proof that when we come back to the source and interpret it in a modern way, we uncover the values of the so-called traditional world.”

Following her appearance in San Francisco, Bilińska performed in Los Angeles on December 9, at the Pico Union Project.

“In the face of misunderstandings, conflicts, festering wounds and lack of dialogue, one of the routes to overcoming these obstacles is art,” Bilińska said. “And the purest and most abstract of the arts – music – perhaps works the most profoundly, because it operates at the level of emotions; it refers to the deepest, most unnamed layers of our humanity.”