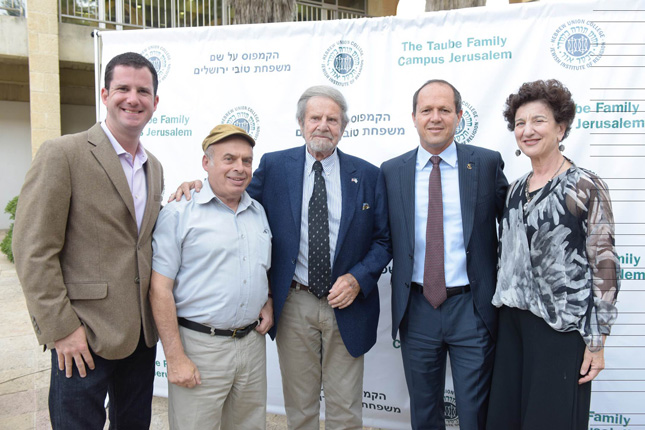 From left to right: Sean Taube, son of Tad Taube; Natan Sharansky, Chairman of The Jewish Agency for Israel; Tad Taube, Founder and Chairman, Taube Philanthropies; Mayor Nir Barkat, Mayor of the City of Jerusalem; and Shana Penn, Executive Director of Taube Philanthropies; celebrate as The Taube Family Campus at Hebrew Union College-Jewish Institute of Religion was named today, June 29, 2016. Today’s groundbreaking ceremony at the Jerusalem campus honored Tad Taube, founder and chairman of Taube Philanthropies. San Francisco-based Taube Philanthropies’ $15 million grant to HUC-JIR is its largest grant ever to a Jewish organization, and will enable the Reform Movement’s headquarters in Israel to update, enhance and beautify its Jerusalem campus as a vibrant academic, cultural and spiritual center welcoming the larger Israeli community and visitors from around the world.

JERUSALEM – Today, The Taube Family Campus at Hebrew Union College-Jewish Institute of Religion was named during a groundbreaking ceremony honoring Tad Taube, founder and chairman of Taube Philanthropies. Taube Philanthropies’ $15 million grant, its largest grant ever to a Jewish organization, will enable the Reform Movement’s headquarters in Israel to update, enhance and beautify its Jerusalem campus as a vibrant academic, cultural and spiritual center welcoming the larger Israeli community and visitors from around the world.

“Hebrew Union College-Jewish Institute of Religion is doing groundbreaking work in training the next generation of Reform rabbis, cantors, educators, and nonprofit leaders, for Israel and the Jewish people as a whole,” said Tad Taube, Chairman of Taube Philanthropies. “Its Jerusalem campus, Jewish professional leadership development, brilliant faculty, and ambitious students deserve a beautiful, modern campus that matches the institution’s lofty goals. We are honored to be a part of this community as it achieves new heights in Jewish and rabbinical education.”

Rabbi Aaron Panken, president of Hebrew Union College, added, “We are enormously grateful to Tad Taube for his vision and support as we enhance, modernize and complete our Jerusalem campus. Here in the heart of the modern State of Israel is where the vital links of mutual partnership and responsibility between Israel and the global Jewish people – arevut – are forged among the next generations of Jewish leaders. Our students and alumni are teaching, leading and building these vital links, more crucial today than ever before, among the two million Reform Jews worldwide and within thousands of congregations, organizations and institutions throughout Israel and the Diaspora. Taube Philanthropies’ generous gift will secure our Jerusalem campus as an enduring testament to the vibrant ties uniting Israel, North American Jewry, and the global Jewish people.”

As part of capital improvements, the grant will cover a prominent new entrance to the campus, which will be designed by internationally renowned architect Moshe Safdie, the architect who designed the campus expansion three decades ago. The new entrance gate and piazza will be along King David Street, the city’s most significant thoroughfare bridging the ancient and new sections of Jerusalem. The new spaces designed by Safdie and the renovation of the very first campus building, designed by International Style architect Heinrich Heinz Rau in 1963, will create compelling public spaces for worship services, educational programs, and cultural events.

Jerusalem Mayor Nir Barkat, Jewish Agency for Israel Chairman Natan Sharansky, U.S. Ambassador to Israel Daniel Shapiro, and Polish Ambassador to Israel Jacek Chodorowicz were among the dignitaries addressing the convocation, which was attended by governmental, academic, spiritual and cultural leaders of Israel.

HUC-JIR's Jerusalem campus is the headquarters for the Reform Movement in Israel, including the World Union for Progressive Judaism, Israel Movement for Progressive Judaism, Union for Reform Judaism, and Israel Religious Action Center. HUC-JIR prepares Israeli rabbis, educators, and pastoral counselors who are pioneering religious pluralism in the Jewish State and serving the global Jewish people. All HUC North American rabbinical, cantorial and education students are required to spend their first year of study at the campus, where they establish lifelong ties to Israel that they later transmit as leaders of congregations, organizations, and communities worldwide.

HUC-JIR will also collaborate with Taube Philanthropies’ senior staff to foster increased interaction with members of the HUC-JIR community, with a special emphasis on the Jewish community in Poland. Taube Philanthropies has a long history supporting the revitalization of Jewish life and culture in Poland. Tad Taube was born in Krakow in 1931 and was fortunate enough to escape Poland on the eve of the Holocaust as a young boy; he has spent his later years committed to supporting Poland’s Jewish resurgence. HUC-JIR’s and Taube Philanthropies’ joint efforts will include lectures, travel, and site visits that will enrich faculty teaching and student learning to foster a strong connection with Jewish history and Jewish peoplehood.

About The Taube Family Campus in Jerusalem: In 1954, the government of Israel offered HUC-JIR a two-acre site to support the building of a center in Jerusalem. The campus was dedicated in 1963 with a gala convocation featuring speeches by Prime Minster David Ben-Gurion, Foreign Minister Golda Meir, and other luminaries. The original building, built of white Galilee limestone, included the first Reform synagogue in Israel. In 1965 the campus’s Nelson Glueck School of Biblical Archaeology, in cooperation with Harvard University and the Israel Department of Antiquities and Museums, launched excavations at Tel Gezer. In 1970, HUC-JIR became the first North American seminary to require all rabbinical students to spend their first year of study in Jerusalem, which later expanded to encompass all first-year education students (1973) and cantorial students (1986). The Israel Rabbinical Program for Israeli students was launched in 1975. In 1983, ground was broken for the major expansion of the campus by architect Moshe Safdie on the four-acre site adjacent to the original HUC-JIR buildings. The dedication of the campus in 1986 was addressed by Prime Minister Yitzhak Shamir and Jerusalem Mayor Teddy Kollek. The M.A. Program in Pluralistic Jewish Education for Israeli educators was begun in 1994, followed by programs in pastoral counseling and chaplaincy for Israeli clergy and healthcare professionals, as well as a program in social entrepreneurship. Renamed The Taube Family Campus on June 29, 2016, this academic, spiritual, and cultural center of the Reform Movement in Israel will engage Israelis and visitors of all faiths from around the world.

Taube Philanthropies was established in 1981 by its founder and chairman, Tad Taube. Based in the San Francisco Bay Area, the foundation makes philanthropic investments in Jewish, civic, and cultural life primarily in the Bay Area, Poland, and Israel. The grant making program supports institution-building, scholarship, heritage preservation, arts and culture, and education. Taube Philanthropies is committed to collaborative giving for greatest charitable impact and actively partners with individual donors and other foundations. taubephilanthropies.org