Presidential Candidate Mitt Romney Visits the Museum of the History of Polish Jews in Warsaw, Poland

Presidential Candidate Mitt Romney Visits the Museum of the History of Polish Jews in Warsaw, Poland

Taube and Koret Foundation representatives join in welcoming the Romneys

The Museum of the History of Polish Jews, slated to open in 2013, is the first and only museum to focus on the thousand-year history of Polish Jewry. The Museum is a public- private partnership, the first of its kind in Poland. The Polish government financed the building at a cost of over $70 million; the City of Warsaw donated the priceless land; and a Jewish nonprofit is solely responsible for the content of the Museum's educational and exhibition programs, developed by an international team of Jewish studies scholars from Poland, the US, Europe and Israel.

This interactive, narrative museum will be a center for lifelong education and remembrance for a diverse, global public, its importance reaching beyond Poles and Jews. The millennium of Polish Jewish culture has left a strong mark on Western civilization, particularly in the United States.

“We are honored that Mr. Romney, during his brief visit to Poland, has paid tribute to the enduring legacy of Polish Jewry in shaping both modern Jewish culture and Western, Judeo-Christian civilization,” stated Tad Taube, president of the Koret Foundation and chairman of the Taube Foundation for Jewish Life & Culture.

The museum will take its place alongside the United States Holocaust Memorial Museum in Washington and Yad Vashem in Jerusalem as some of the most important Jewish cultural institutions of their kind. The primary difference is that the Museum of the History of Polish Jews will extend the historical narrative beyond the Holocaust to encompass an epic Jewish heritage from which the majority of world Jewry descends. At the same time, it will be Europe’s largest Jewish history museum. The museum also will provide Poland’s capital city with a new cultural institution that will set a standard for museums internationally. 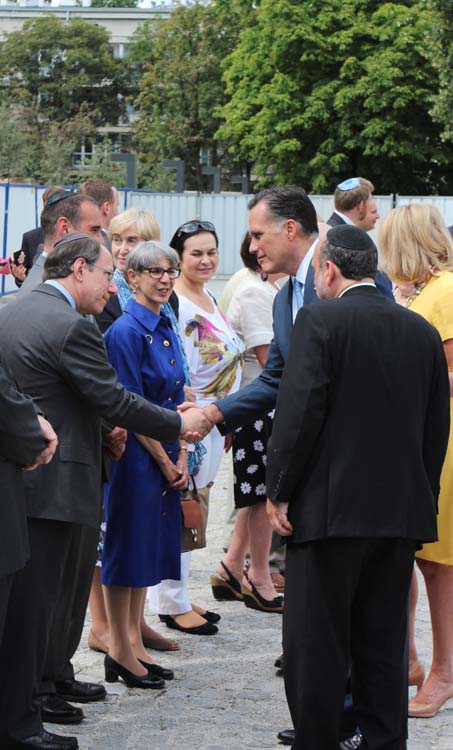 Photo Credit: Museum of the History of Polish Jews/Rafal Grunt