U.S. Senator Barbara Mikulski Visits the Museum of the History of Polish Jews, in Warsaw, Poland 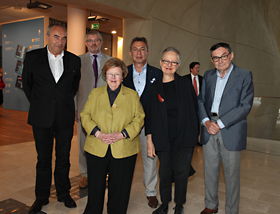 On a visit to Poland, U.S. Senator and Chairwoman of the Senate Appropriations Committee Barbara Mikulski (D-MD) was given a tour of the Museum of the History of Polish Jews, escorted by the Director of the Core Exhibition, Dr. Barbara Kirshenblatt-Gimblett, and joined by Museum leadership and representatives from the U.S. Embassy in Warsaw. Senator Mikulski viewed the stunning architecture of the Museum and the centerpiece of the Core Exhibition, the close-to-scale replica of the 17th-century wooden synagogue, whose bimah, the final piece of the replica, was recently installed in early August.

Present to welcome the senator were Piotr Wiślicki and Marian Turski, Chairman and Deputy Chairman of the Association of the Jewish Historical Institute of Poland; Andrzej Cudak, Acting Director of the Museum; and Zygmunt Stępiński, Deputy Director of Educational and Cultural Programming.

Senator Mikulski has dedicated herself to strengthening ties between the U.S. and Poland via advocacy of Poland’s inclusion in the U.S. Visa Waiver Program, which would enable Poles to visit the U.S. without a visa, as U.S. citizens may currently visit Poland. Institutions such as the Museum of the History of Polish Jews will draw huge numbers of visitors from the U.S. to Poland, and is yet another reason that Poles should be welcomed into the U.S. without the restriction of a visa.

“We are honored that Senator Mikulski, during her brief visit to Poland, has paid tribute to the enduring legacy of Polish Jewry in shaping both modern Jewish culture and Western, Judeo-Christian civilization, and we are pleased that the Polish community was able to meet one of its greatest allies,” stated Tad Taube, Chairman of the Taube Foundation for Jewish Life & Culture, President of the Koret Foundation, and Honorary Consul for the Republic of Poland in the San Francisco Bay Area.