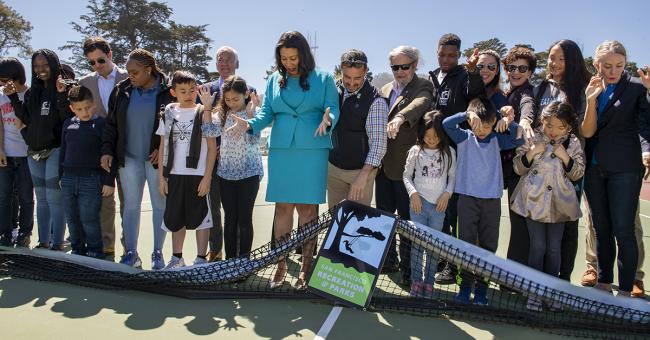 Tennis enthusiasts of all ages gathered on April 17 with City officials, the Tennis Coalition of San Francisco, and the San Francisco Parks Alliance to celebrate a new era for public tennis in San Francisco with the groundbreaking of the Golden Gate Park Tennis Center renovation.

The San Francisco Recreation and Park Department’s $27 million project, funded almost entirely through private donations, will transform the 125-year-old site into one of the best public tennis facilities in the nation and allow the public more than 20,000 hours of additional playtime each year. It will include 17 new USTA-regulation tennis courts, a sunken feature court, and a dedicated pickleball court. Off the court, players will enjoy a new 7,800 square foot clubhouse with a player’s lounge, recreation room, locker room and kitchen and a garden area for viewing, socializing and relaxing.

“From the legendary Billie Jean King to hometown hero Peanut Louie Harper, some of the tennis world’s brightest stars honed their games on the Golden Gate Park tennis courts,” said Mayor London Breed. “This renovation ensures that all San Franciscans, including the next generation of tennis greats, have access to a world-class facility.”

District 5 Supervisor Vallie Brown said the new facility will increase recreation options for tennis players of all ages and abilities.

“What’s so wonderful about the new Tennis Center is that although it will be one of the best in country, it’s not just for elite players,” said Brown, “It’s for everyday San Franciscans, for seniors and kids, a place where diverse communities can gather to socialize and share their mutual love of the game.”

City officials, community members, and children from the TLC program performed a ceremonial “net drop” to mark the beginning of the project.

“Simply, we are planning one of the best public tennis centers in the country,” said San Francisco Recreation and Park Department General Manager Phil Ginsburg. “Not only will the public will enjoy more than 20,000 hours of playtime, but youth—the heart of this project—will be able to improve both their games and their lives through an expanded TLC program.”

"With 17 state-of-the-art, lighted courts and lots of places where you can enjoy watching your kid's lesson or your team compete, we'll have an energized public tennis center with affordable, reservable courts and programs for players of all ages and abilities,” said Tennis Coalition of San Francisco Co-Chair Lois Salisbury. “What's more, with a stadium court and a big, beautiful clubhouse, all professionally run, the new GGPTC will be the bedrock of tennis for the City, building community and strengthening tennis as a lifetime sport throughout the Bay Area."

The new Golden Gate Park Tennis Center has been secured through a public-private partnership with leadership gifts from Taube Philanthropies, the Lisa and Douglas Goldman Fund, the Koret Foundation, Jackie & Joby Pritzker, and an anonymous donor. Approximately $4.5 million has been allocated to this project by the San Francisco Recreation and Park Department, from the 2012 Clean and Safe Neighborhood Parks Bond.

Every donation was matched by Taube Philanthropies through a $6.5 million grant.

“We are honored to serve as a catalyst to provide an outstanding tennis center for the people of San Francisco—and to provide a tennis venue for young and old, amateur and beyond,” said Founder Tad Taube.

“Anytime we increase the level of a facility in the community—make it more attractive, cleaner, more current, and looking toward the future—all of us benefit,” said Lisa and Douglas Goldman Fund President Douglas Goldman.

The tennis courts drew 600,000 visits last year, a third from the neighborhoods bordering Golden Gate Park, according the StreetLight Data, a San Francisco company the park partners with to understand visitor counts across one of the nation's most visited parks.