WARSAW – At a ceremony on Friday, June 26, at the Presidential Palace in Warsaw, Polish President Bronisław Komorowski formally announced that San Francisco philanthropist Tad Taube will receive the highest level official state distinction for a foreign civilian. Taube, who has devoted a major focus of his philanthropy to supporting the revitalization of Jewish life in his native Poland, will receive the Commander’s Cross with Star of the Order of Merit.

Taube, a major benefactor of the POLIN Museum of the History of Polish Jews, which celebrated its grand opening in October, is being honored for his decade-long mission supporting – and cultivating significant additional American support – for the museum and Jewish life and culture in Poland. Taube was born in Krakow in 1931 and escaped with his family to the United States in 1939. Today, he serves as Honorary Consul for the Republic of Poland in San Francisco.

During the ceremony, Taube was acknowledged “for extraordinary merits of creating the POLIN Museum of the History of Polish Jews.”

Shana Penn, executive director of Taube Philanthropies, the foundation that Taube founded and for which he serves as chairman, accepted the honor on Taube’s behalf. Taube received the Commander’s Cross from the President of Poland in 2004, as did Penn in 2013.

President Komorowski said at the ceremony, “It is worthwhile to harness economic freedom, which is an important part of Polish freedom and democracy, into important cultural causes.” He thanked all those “who engaged in organizing great, extraordinary causes important for Poland like the POLIN Museum.” He thanked donors such as Taube for helping to bring the Western model of private patronage supporting public patronage to Poland.

In total, 14 individuals were honored, with Taube to receive the highest medal.

In a film recorded during the October 2014 grand opening of POLIN Museum of Polish Jewish History, Taube describes his connection to Poland, and his rationale for supporting the revival of Jewish life there. “The Jews had a very important role here. They weren’t just chased out of Poland; they weren’t just survivors of death camps. They made this country culturally and historically much what it is. There’s a saying that … there’s no Poland without Jews, and there are no Jews without Poland.” 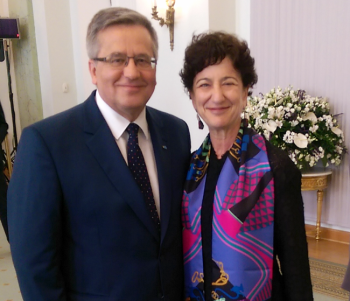 Taube Philanthropies was established in 1981 by its founder and chairman, Tad Taube. Based in the San Francisco Bay Area and with an office in Warsaw, the Foundation makes philanthropic investments primarily in the Bay Area and Poland, in scholarship, heritage preservation, arts and culture, education, and institution-building. Taube Philanthropies is committed to collaborative giving for greatest charitable impact and actively partners with individual donors and other foundations. For more information, please visit www.taubephilanthropies.org.