KRAKÓW – At the Tempel Synagogue on July 3, during the Jewish Culture Festival, Taube Philanthropies Executive Director Shana Penn presented the 2015 Award to a pioneer in multicultural civic engagement in Poland. Taube Philanthropies awarded Krzysztof Czyżewski, a social activist, scholar, and founding director of the Borderland Foundation (Fundacja Pogranicze) in Sejny, which is committed to building bridges between cultures and ethnicities.

As she presented the award to him, Penn said of Czyżewski’s work, “This isn’t nostalgia. This isn’t utopian. This is radical recovery of memory for the purpose of civic and multicultural engagement. The activities of the Borderland Foundation combine hands-on cultural activism with literary and intellectual endeavors to recover the East European borderlands’ diverse and multilingual heritage. Its humanistic goal is to overcome regional and nationalistic divisions and to build bridges between local ethnic groups, thus promoting dialogue among various, and at times conflicting, identities, memories and religions.”

Czyżewski was one of the first activists who helped foster a multicultural heritage in Poland after the fall of Communism, in which Jewish culture plays a major part. Czyżewski established the Borderland Foundation (Fundacja Pogranicze) in Sejny in 1990, Borderland Center of Arts, Cultures, and Nations in 1991, and Borderland Publishing House (Wydawnictwo Pogranicze), as well as the magazine Krasnogruda, in 1993​. For his efforts, in 2014 he received Israel’s prestigious Dan David Prize.

As he accepted the award, Czyżewski thanked Taube Philanthropies for honoring him, calling himself a “man of the borderland” who had always been fighting for the inclusion of the Jewish heritage into the living stream of culture. He cited several lessons he had learned from Jewish heritage and tradition and acknowledged there could be no new Poland without the memory of shared Polish-Jewish heritage. He noted, “We often are the builders of bridges, yet making it to the other side is only half of the bridge – because what the bridge really enables is the return, the return to ourselves.”

The second award presentation ceremony to 2015 co-awardee Dr. Jan Kulczyk, a Polish businessman who donated the largest single gift (more than $6 million) to the new POLIN Museum of the History of Polish Jews in Warsaw, will take place at the museum on October 13, 2015.

The Irena Sendler Memorial Award was​ created in 2008 by Taube Philanthropies in memory of courageous partisan Irena Sendler whom Yad Vashem named a “Righteous Among The Nations.” Each year, in commemoration of her, the award is​ presented to Polish citizens who have been exemplary in preserving and revitalizing​ their country’s Jewish heritage.​ 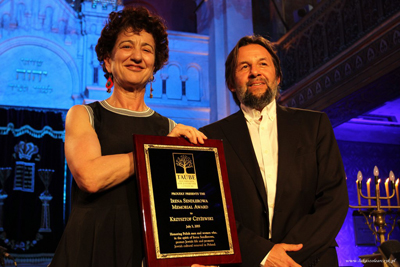 For more information about the award program or to schedule interviews,
please email: info@taubephilanthropies.org