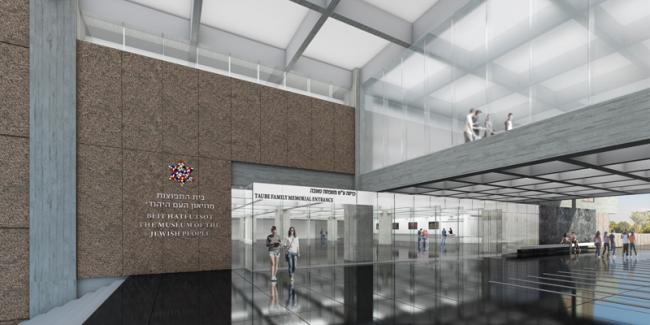 SAN FRANCISCO – A $5 million gift from Taube Philanthropies will pave the way for a new gateway to The Museum of the Jewish People at Beit Hatfutsot. The Taube Family Memorial Entrance and Tad and Dianne Taube Lobby will welcome visitors to the museum as they explore new exhibits featuring the past, present and future of the Jewish people in Israel and throughout the world. The Taube Family Memorial Entrance honors philanthropist Tad Taube’s sister, Nita Hirsch, and his parents, Zyg and Lola Taube.

The Memorial Entrance to the museum, which stands in the heart of the Tel Aviv University campus, will serve as a gathering place for visitors and students alike, and a 10,800-square-foot lobby will set the tone for the museum through visual displays that prepare visitors for the exhibits within. Thanks to the grant, the museum will be able to start renovations this fall, culminating with the opening of a new core exhibition in 2019.

The new wing permanently houses both the Alfred H. Moses & Family Synagogue Hall and the Milton and Tamar Maltz Family Children’s Gallery, as well as two galleries for temporary exhibitions, currently showing “Operation Moses: 30 Years After,” an exploration of the immigration and absorption of the Ethiopian-Israeli community into Israel, and “Forever Young,” a celebration of the life, times and Jewish impact of Bob Dylan, in honor of Dylan’s 75th birthday.

“The Museum of the Jewish People at Beit Hatfutsot serves to underscore that irrespective of where we live, the Jewish people are connected through our customs, traditions and beliefs,” said Tad Taube, chairman of Taube Philanthropies. “We are honored to become part of the vision to transform one of the oldest museums in Israel into a 21st century landmark that celebrates Jewish peoplehood around the world.”

This is the second major recent grant by Taube Philanthropies to support landmark Israeli institutions. Last summer, Taube Philanthropies awarded a grant to enhance the Jerusalem campus of Hebrew Union College-Jewish Institute of Religion, now known as The Taube Family Campus. The grant provided, among other restorative improvements, a prominent new entrance to the campus, designed by internationally renowned architect Moshe Safdie.

The new Taube Family Memorial Entrance and Tad and Dianne Taube Lobby at the Museum of the Jewish People at Beit Hatfutsot are expected to be complete by the end of 2019.

About The Museum of the Jewish People at Beit Hatfutsot

Established nearly forty years ago, Beit Hatfutsot remains the sole institution anywhere in the world devoted to sharing the complete story of the Jewish people with millions of visitors from all walks of life. Today, reimagined as the Museum of the Jewish People at Beit Hatfutsot, the museum works on-site, online and around the world to build connections across the Jewish people through a diverse, innovative celebration of 4,000 years of Jewish life, culture and history, engaging to those of any age, background or lifestyle. Major supporters include The Nadav Foundation, The Government of Israel, The Koret Foundation, Ambassador Alfred H. Moses and Family, and The Milton and Tamar Maltz Family Foundation. bh.org.il

About Taube Philanthropies was established in 1981 by its founder and chairman, Tad Taube. Based in the San Francisco Bay Area, the foundation makes philanthropic investments in Jewish, civic, and cultural life primarily in the Bay Area, Poland, and Israel. Its grant making programs support institution-building, scholarship, heritage preservation, arts and culture, and education. Taube Philanthropies is committed to collaborative grant making for greater charitable impact and actively partners with other philanthropic organizations and individuals. taubephilanthropies.org