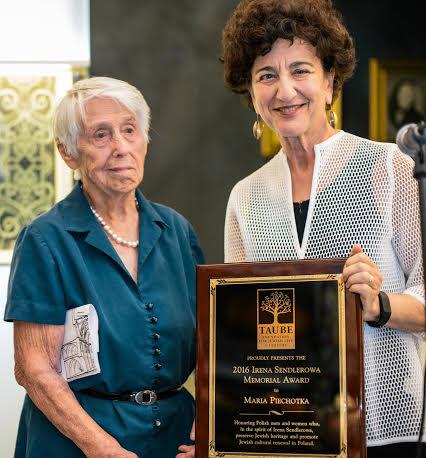 WARSAW – Polish architect Maria Piechotkowa, renowned Polish architect and author of several groundbreaking publications upholding the architectural memory of buildings destroyed in WWII, especially synagogues, was honored for her commitment to preserving Poland’s Jewish heritage, on September 16, at the POLIN Museum of the History of Polish Jews.

Taube Philanthropies presented its 2016 Irena Sendler Award to Piechotkowaat a ceremony under the museum’s replica of the 18th-century Gwoździec wooden synagogue.

Said Shana Penn, Executive Director of Taube Philanthropies, who presented the award to Piechotkowa, “We come together under this magnificent synagogue replica and intricate painted ceiling to honor Maria Huber Piechotkowa because this replica – and the phenomenon of today’s Jewish cultural revival in Poland that it exemplifies – would not

have been possible without the pioneering vision, passionate interest, and dedicated research that Maria and her husband, the late Kazimierz Piechotka, pursued over many decades. Together, the Piechotkas rescued from virtual oblivion the wooden synagogue’s architectural significance and beauty and established its place in the histories and heritages of Poland and of Jews for generations to come. 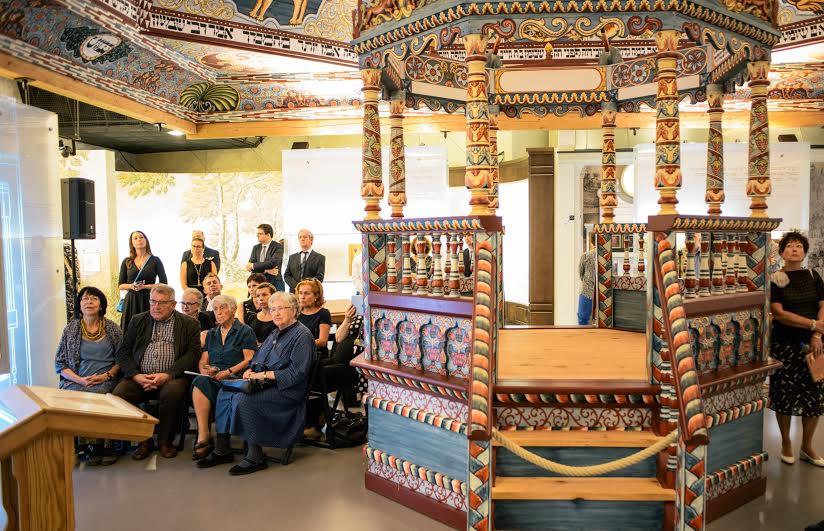 Award ceremony took place in the POLIN Museum of the History of Polish Jews, in the exhibition gallery with the model 18th-century wooden synagogue from Gwoździec;
Photo: Maciek Jazwiecki

“Poles and Jews inside and outside of Poland are deeply indebted to the Piechotkas for their historic contributions to the recovery, preservation and memory of Jewish heritage in Poland, which the wooden synagogue represents. They have transmitted their devotion and knowledge to generations of students of architecture, art, history, religion, and culture. They have brought Jews and Poles together to share cultural pride.”

Piechotkowa was active in the Warsaw Uprising and in 1944, began her efforts to record the architectural detail of destroyed buildings, with a special focus on wooden synagogues. Together with her late husband, Kazimierz Piechotka, she co-authored several books on the subject, including Gates of Heaven: Wooden Synagogues on the Territory of the Former Republic, published in 1957, which has become the seminal work in the field. In 2000, the couple was awarded the Jan Karski and Pola Nireńska award from the YIVO Institute for Jewish Research.

“With her historic vision of a multicultural Poland, Maria Piechotkowa has had a profound and long-lasting impact on Polish society and helped to preserve Poland’s rich Jewish heritage,” said Tad Taube, Chairman of Taube Philanthropies and Honorary Consul for the Republic of Poland in San Francisco. “Many generations of scholars and architects who study wooden synagogues continue to reference her and her husband’s groundbreaking research.”

Zachwatowicz, a friend of Piechotkowa, whose father Jan Zachwatowicz was the architect who led the monumental postwar reconstruction of Warsaw, particularly the Stare Miasto, and was a mentor to the Piechotkas.

Monika Adamczyk-Garbowska, professor of English and Comparative Literature at the Maria Curie-Skłodowska University in Lublin, who has made significant contributions, in Poland and internationally, to both teaching and publishing in Jewish and Yiddish literature studies, was honored as a 2016 Irena Sendler Memorial Award co-recipient earlier this year.

The Irena Sendler Memorial Award was created in 2008 by Taube Philanthropies in memory of courageous partisan Irena Sendler whom Yad Vashem named a “Righteous Among The Nations.” Each year, in commemoration of her, the award is presented to Polish citizens who have been exemplary in preserving and revitalizing their country’s Jewish heritage.