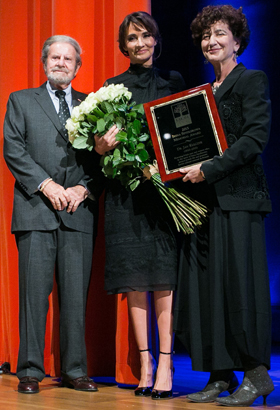 WARSAW – Polish businessman and entrepreneur Dr. Jan Kulczyk, who donated the largest single gift (more than $6 million) to the POLIN Museum of the History of Polish Jews, was honored posthumously at a special ceremony at the Museum on October 13. Taube Philanthropies presented its 2015 Irena Sendler Memorial Award to Dr. Kulczyk’s children, Dominika Kulczyk and Sebastian Kulczyk, in honor of their father’s commitment to honoring and advancing Jewish culture and history in Poland.

Dr. Kulczyk was Poland’s wealthiest businessman, influential throughout Central and Eastern Europe, as well as a generous philanthropist and patron of many cultural institutions. His support of Warsaw’s POLIN Museum, which celebrated its Grand Opening in October 2014, was critical to its development as an institution that has quickly become acclaimed worldwide. Dr. Kulczyk passed away suddenly on July 29, at the age of 65.

“Dr. Jan Kulczyk embodied the deep awareness shared by so many Poles that Jewish history is integral to their national history,” said Tad Taube, Chairman of Taube Philanthropies, who presented the award. “Jan’s leadership in business and in philanthropy could not be matched. As a third-generation Pole with remarkable financial acumen and passion for his country, Jan’s investments have supported the development of essential infrastructure and energy resources that have helped stimulate the Polish economy. And Jan truly understood the spirit of collaborative giving, as demonstrated through his joining the international effort to support the Museum.”

The Honorable Aleksander Kwaśniewski, former President of Poland, added, “Jan Kulczyk was a man who crossed all boundaries, who had a vision and knew how to realize it. I am proud to say that I convinced him to join this great project of the POLIN Museum. When we visited the exhibit together on the day of its Grand Opening, it was clear how satisfied he was that this contributions had helped to establish an institution with an impact not only in Poland, but all over the world.”

Dominika Kulczyk addressed the audience of the Sendler Award Ceremony and Memorial to her father, Dr. Jan Kulczyk, on October 13, 2015, at the POLIN Museum of the History of Polish Jews, as follows:

Good evening ladies and gentlemen, dear friends. People were most important to Dad – people and their history. And the history of Poles is the history of the Polish Jews who lived here, in Poland, and in POLIN, which is now a place where you can rest and contemplate. I believe that dad is in such a place. A place with light. That he’s happy that he could be a part of this beautiful project, this work. Work about a future. Overcoming the difficult history of the Polish nation, of the Jewish nation, a nation that was supposed to have been wiped from the pages of history during World War II. But this museum is proof that totalitarianism has no future. It is proof that evil will not triumph over the dignity, truth, reconciliation, and unity my father spoke of – our father spoke of. He will be here, in this place. This is a place for us all, for our children, and for their children. And thank you for being here with us this evening.

A leader in Polish cultural and civic life, Dr. Kulczyk served as the Board Chair of Green Cross International, and Kulczyk Investments sponsored the Polish Olympic team. Among his many accolades, Dr. Kulcyzk was recognized as a Patron of Culture in 2012 from Poland’s Minister of Culture and National Heritage for supporting the POLIN Museum. In June of this year, he was awarded the Officer’s Cross of the Order of Polonia Restituta by President Bronisław Komorowski for outstanding achievements in activities that support Polish culture and national heritage.

In once describing his gift to the Museum, Dr. Kulczyk spoke prophetically: “For me, POLIN Museum is a moral compass. It teaches us that there are no shortcuts without tolerance, respect, and forgiveness. It reminds us of our obligation to leave a trace of all that we value when we are no longer here.”

To further honor Dr. Jan Kulczyk’s legacy, the 2016 Jewish Culture Festival in Kraków will name its annual pre-Shabbat concert at the Tempel Synagogue in his memory. This will be the first time in the Festival’s 26-year history that the concert will recognize an individual. This concert is preceded each year by the awarding of the Irena Sendler Memorial Award. During this year’s Festival, Taube Philanthropies honored 2015 co-recipient Krzysztof Czyżewski, a pioneer in multicultural civic engagement in Poland. Czyżewski is a social activist, scholar, and founding director of the Borderland Foundation (Fundacja Pogranicze) in Sejny, which is committed to building bridges between cultures.The annual celebration is followed by a Shabbat dinner for hundreds of guests hosted by JCC Kraków, during which current and past Sendler Awardees are celebrated as guests of honor.

The Irena Sendler Memorial Award was​ created in 2008 by Taube Philanthropies in memory of courageous partisan Irena Sendler whom Yad Vashem named a “Righteous Among The Nations.” Each year, in commemoration of her, the award is​ presented to Polish citizens who have been exemplary in preserving and revitalizing​ their country’s Jewish heritage.​