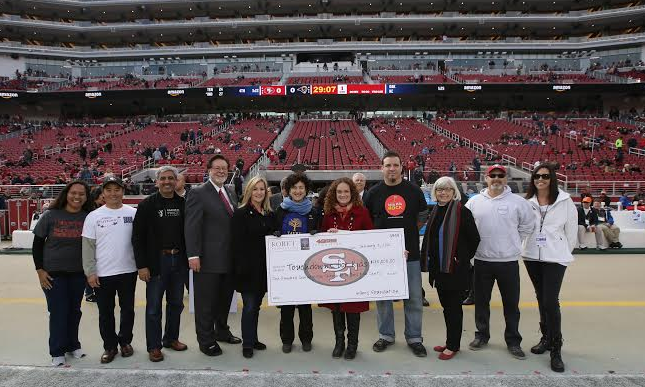 Since the San Francisco 49ers Touchdowns for Kids program launched in 2011, Taube Philanthropies, the 49ers Foundation, Koret Foundation, and other supporters have donated nearly $1.5 million to support Bay Area organizations that enrich the lives of local youth. With every touchdown made by the 49ers, $5,000 is donated, and with each field goal, interception, and sack that's made, $1,000 donations are made. Now at the end of their 5th season, Touchdowns for Kids is directing $181,000 to these 7 youth organizations:

Breakthrough Collaborative increases the academic opportunity for highly motivated, underserved students and put them on the trajectory of a successful college path, and to inspire and develop the next generation of teachers and educational leaders. Read more at: breakthroughcollaborative.org

La Casa de las Madres, a San Francisco organization that fights against domestic violence, providing access, tools, and support to women and children exposed to and at risk of abuse to strengthen their ability to affect change and break the cycle of violence. Read more at: lacasa.org

Little Kids Rock, an organization which provides a musical curriculum at underserved K-12 public schools across the country that are without, including donating the musical instruments free of cost. Read more at: littlekidsrock.org

San Francisco 49ers Academy serves K-8th graders in East Palo Alto, maximizing the potential of every middle student by emphasizing self-discipline, respect, and individualized academic attention to help them master their core subjects and prepare for high school and providing safe and supportive after-school programs for each student. Read more at: 49ersacademy.org

Silicon Valley Faces builds a community free of bias, bigotry and violence by transforming youth into community builders through their camps, programs and workshops. Read more at: svfaces.org