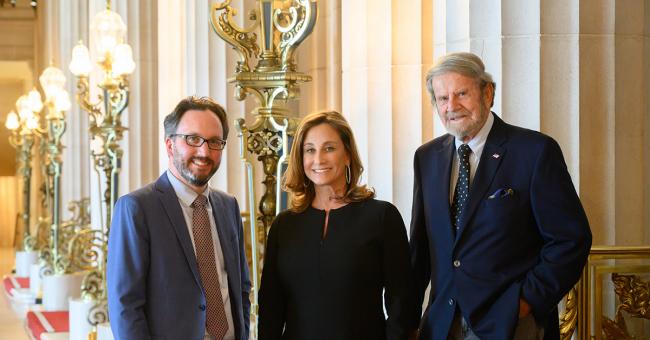 “Dianne and I have a long history of funding a variety of projects that support and enhance the San Francisco Opera,” said Tad Taube, chairman of Taube Philanthropies and a Bay Area real estate executive.  “We wanted to establish a lasting and meaningful legacy, and it seemed to us that the best way to ensure our opera company remains one of the worlds best is to invest in the Opera’s ability to recruit and retain brilliant general directors such as Matthew Shilvock.”

As longtime patrons and Company sponsors of San Francisco Opera, the Taube family has generously supported more than a dozen mainstage productions and provided signature funding for the Dianne and Tad Taube Atrium Theater, a state-of-the-art, 299-seat venue in the Diane B. Wilsey Center for Opera designed to be configured in multiple ways, providing both performers and audience with an intimate concert experience. Additionally, through their efforts in establishing the Koret/Taube Media Suite, the Taubes have been instrumental, as sponsors of Opera at the Ballpark, in supporting the Company’s free live simulcasts to the home of the San Francisco Giants. Since 2007, Opera at the Ballpark simulcasts have been experienced by more than 300,000 Bay Area residents and families.

“It is a great privilege to be partnering with Tad and Dianne in this new capacity,” said Matthew Shilvock. “They have been at the forefront of creativity with the Company for so many years, championing transformative art on stage, and making possible innovative ways to reach new audiences. I am deeply grateful for their belief in the future of the Company and for their extraordinary generosity, and I am excited for what we can accomplish together in the years ahead.”