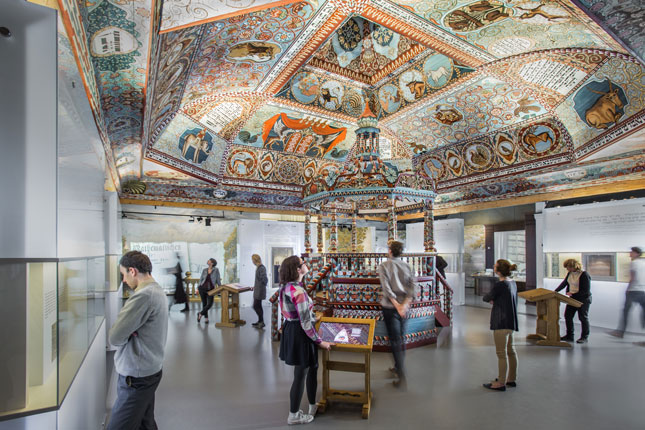 ​Photo: Magdalena Starowieyska/POLIN Museum of the History of Polish Jews.

The jury wrote of this year's awardee, the POLIN Museum:

POLIN Museum meets the criteria for this prize at its maximum. It is not just an excellent museum but a state of the art cultural institution which reaches diverse publics all over the world. That is why it deserves the title of a "Total Museum." The diversity and variety of its activities and the scope of its aims and goals makes it a unique institution with a worldwide impact. The institution meets the criteria for the European Museum Academy Prize perfectly.

Apart from its impressive so-called Core Exhibition - a journey through the 1,000 year history of Polish Jews in acts and scenes in eight chapters on a surface of 4,200 m² - the institution presents a lot of important side-elements.

This portal contains information about 2,000 towns inhabited by Jews in the territories of Poland, Belarus, Ukraine, Lithuania, and Russia with details on synagogues, cemeteries and so on. It is a social network created by thousands of users and contributors worldwide.

The mission of this program is to promote Polish-Jewish studies internationally. It supports fellowships, seminars, lectures, research workshops, conferences, and publications.

POLIN has set up a traveling exhibition 'Museum on Wheels' about the history and culture of Polish Jews. It visits 47 towns all over the country. Each town can adapt it to its own history.

The EMA Prize is not necessarily presented every year and is given by the Board of EMA on the basis of proposals submitted by its Pool of Experts, National Representatives, International Supporters, or other groups that are involved in EMA activities. In 2011 the Prize was awarded to the Galileo Museum, Florence, Italy and in 2013 to the Foundation Europeana, The Hague, The Netherlands.

The Prize ceremony will take place during the Annual General Meeting of the Europeana Network Association in Riga, on November 8, 2016.