Exhibit on “100 Years of the Joint” at Osher Marin JCC 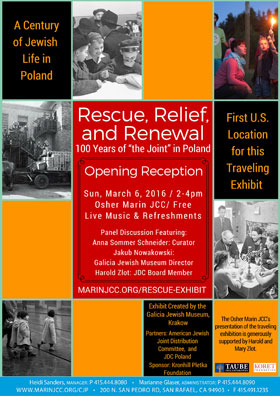 In a display of history, documentation and photography, the exhibition “Rescue, Relief, and Renewal: 100 Years of ‘the Joint’ in Poland,” will open at the Osher Marin JCC on March 6, 2016. Showcasing rare archival photographs of the American Jewish Joint Distribution Committee (JDC)’s work in the Poland, the exhibit was originally presented at the Galicia Jewish Museum in Kraków, Poland, October 2014 – August 2015. The photographs, some never before seen by the public and others world famous, have been provided by the JDC and by the organizations in Poland that the JDC supports, to highlight the changes and diversity of Jewish life in Poland within the past century. The exhibitions curators will attend the Northern California premier: Jakub Nowakowski, the director of the Galicia Jewish Museum, and Dr. Anna Sommer Schneider, author of two books on the JDC in Poland and a scholar on Holocaust memory and the history of Jews in post-war Poland.

As the exhibit explains, “by showing Jewish life through the prism of the actions of a single organization, these images provide an important portal into the wide spectrum of the Jewish community experience in Poland prior to 1939. The pre-World War II Jewish community in Poland was not only numerous (numbering around 3.3 million people), but also extremely diverse, both religiously and politically. From Orthodox to Progressive to completely secularized; from socialists to Bundists to Zionists. From poor craftsmen and traders living in countless shtetls to prominent intellectuals belonging to the urban elites. The former often needed help, and the latter were themselves involved in local charitable and philanthropic activities.”

The exhibition, running from March 6 – May 31, 2016, will be opened with a reception and panel discussion. The panel will include Anna Sommer Schneider, Curator; Jakub Nowakowski, Galicia Jewish Museum Director; Harold Zlot, JDC Board Member; Linda Levi, JDC Director of Global Archives; and will be moderated by Joanne Greene, Director of Jewish Engagement at the Osher Marin JCC. Discussion topics will include a behind-the-scenes look at the formation of the exhibition, the current revitalization of Jewish culture in Poland, and the impact that the JDC has had on Jewish life and culture in Poland over the last century.

The exhibition was created by the Galicia Jewish Museum, Krakόw through partnerships with The American Jewish Joint Distribution Committee, JDC Poland and with the support of the Kronhill Pletka Foundation. The Osher Marin JCC’s presentation of the traveling exhibition is supported by Mary Zlot and JDC National Board member Harold Zlot. Exhibitions at the Galicia Jewish Museum Kraków and Osher Marin JCC are also supported by the Taube Foundation for Jewish Life & Culture.