Warsaw, Poland, October 27 – The American Jewish Joint Distribution Committee (JDC) and the Jews of Warsaw inaugurated the city's first-ever modern Jewish Community Center in the Polish capital on October 27. Funded by JDC, the Taube Foundation for Jewish Life & Culture, the Koret Foundation, and many other donors, the new JCC is the second in the country and serves as a boutique hub for a vast array of Jewish cultural, educational, and community programs and activities, many taking place outside the JCC's walls, for Warsaw's multi-generational Jewish community. 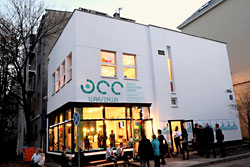 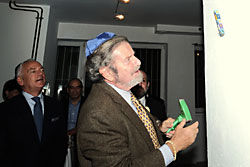 "The opening of the JCC is yet another chapter in the remarkable story of the revival of Jewish life in this country," said JDC CEO Alan Gill. "It's a testament to the perseverance of Polish Jews that they are continuing to rebuild their institutions after surviving near annihilation followed by decades of oppression. JDC is delighted to have teamed up once again with the Jews of Warsaw and esteemed funding partners and passionate activists like Tad Taube to help facilitate this new flagship for Polish Jews to be empowered, innovate, and create their own brand of Jewish identity.'

The 3,000-square-foot free-standing building serves as the boutique center for Jewish activities that will take place in the space and also continue outside its walls in venues like museums, cafés, and other alternative spaces. Located in one of Central Warsaw's hippest neighborhoods, the JCC offers a range of activities around the year including cooking classes, childcare, training programs, Jewish education, theater classes, and a book club to the 900 preregistered members. Before its conversion, the building was a popular café.

The JCC also serves as the central hub for the numerous "JCC Without Walls" programs that have become popular in Warsaw in the last number of years. These have included Jewish street festivals, artistic sukkah installations, and cafe educational programs that draw newly engaged, curious, and fully involved Jews in Jewish life in the city. This formula — a small, centrally energized building that creates programming inside and on the street — addresses the new reality of Jewish engagement that requires various entry points for involvement.

Today, Poland is home to an estimated 25,000 Jews who have access to synagogues of every Jewish denomination, community-wide Sabbath dinners, camping experiences, Jewish learning conferences, Jewish music and food, as well as youth clubs, urban holiday events, study groups, and classes for those who have just discovered their Jewish roots. Poland's first JCC opened in Krakow in 2008, is supported by JDC, and has quickly become a fixture in the life of the local community.

These activities and programs are the result of investments by local and international Jewish organizations, philanthropists, and advocates running the full, pluralistic gamut of religious movements and cultural options. Poland was once home to Europe's largest Jewish population before the Nazis murdered 3 million Jews during the Second World War. The country's remaining Jews were then persecuted under Communist rule.

Although JDC has worked in Poland since shortly after its founding in 1914 and through WWII, it re-entered Poland in 1981 to provide relief services during the Cold War era. Today, JDC continues that work with the local community and across the vast spectrum of religious movements and organizations to ensure the well-being of impoverished elderly and other vulnerable Jews and to help Polish Jews reconnect to Judaism and secure a vibrant future.