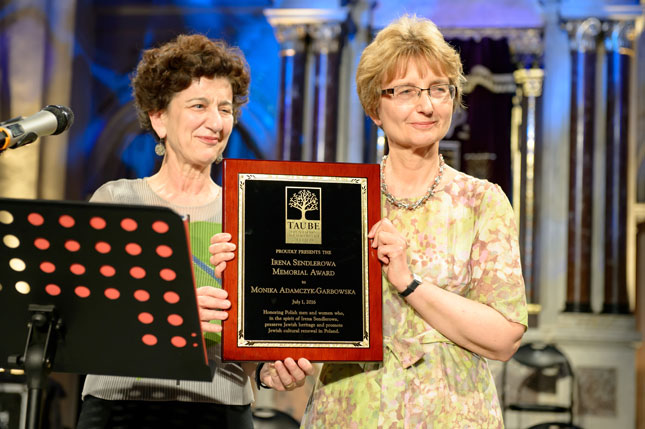 San Francisco/Krakow -- The 2016 Irena Sendler Memorial award was presented to Prof. dr hab. Monika Adamczyk-Garbowska on July 1st, during the Jewish Culture Festival in Kraków. Co-awardee Maria Piechotka will receive the Irena Sendler Award in Warsaw in the Fall 2016.

Prof. dr hab. Monika Adamczyk-Garbowska (Professor of American and Comparative Literature, Maria Curie-Skłodowska University, Lublin) has made invaluable contributions to teaching and publishing in Jewish and Yiddish literature studies. She is the author, editor, and translator of many books, including key works on the life and legacy of Isaac Bashevis Singer. Professor Adamczyk-Garbowska has served on the editorial board of Polin: Studies in Polish Jewry, was the 2006-2007 Ina Levine Scholar-in-Residence at the United States Holocaust Memorial Museum, and in 2004 was awarded the Jan Karski and Pola Nireńska Prize from the YIVO Institute for Jewish Research, in New York, for her research and teaching of Jewish culture and Yiddish literature and language.

"Monika Adamczyk-Garbowska is a pioneer of Yiddish scholarship in Poland, particularly her studies of the life and writings of Nobel laureate Isaac Bashevis Singer. She has inspired generations of students and fellow academics to study Yiddish literature and to understand its place in both Jewish and Polish cultural history," said Shana Penn, Executive Director of Taube Philanthropies. "She has helped to establish Yiddish Studies as a reputable academic field in Poland and to garner academic recognition globally of Polish scholars of Yiddish."

Upon accepting the award from Penn and Taube Foundation Chairman Tad Taube, Adamczyk-Garbowska stated, "I became interested in Jewish culture and history almost 40 years ago, in the late 1970s, when it seemed as if Jewish life in Poland had ended. I had decided to save the traces that had remained, and to learn as much as I could in order to dig out more information from oblivion."

The award program was followed by the first annual memorial concert for the late Dr. Jan Kulczyk, a 2015 Irena Sendler Awardee. The concert was performed by Diwan Saz, a world-famous Israeli-based ensemble. Dr. Kulczyk's daughter, Dominika, and her family were in attendance. Ms. Kulczyk addressed the audience, "Values such as joy and luck, truth, and love, cannot be reached by any shortcut - you need tolerance and respect to reach them. These are the words of my father. I am very deeply moved that we all will be remembering him during this concert."

The Irena Sendler Memorial Award was created in 2008 by Taube Philanthropies in memory of courageous partisan Irena Sendler whom Yad Vashem named a “Righteous Among The Nations.” Each year, in commemoration of the May 12 anniversary of Sendler’s passing, the award is presented to Polish citizens who have been exemplary in preserving and revitalizing their country’s Jewish heritage.