Tad and Dianne Taube and Taube Philanthropies for Decades of Support 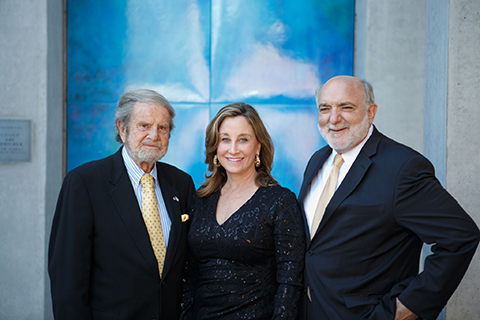 SAN FRANCISCO / LOS ANGELES - The evening of May 15 marked the fifth Annual Benefit Gala at the Hebrew Union College-Jewish Institute of Religion (HUC-JIR) Los Angeles campus to celebrate their leadership and mark the 50th anniversary of the Zelikow School of Jewish Nonprofit Management.

Among the key honorees were Bay Area-based Tad and Dianne Taube of Taube Philanthropies, a family that has been supporting Jewish life and culture both in the Bay Area and around the globe for more than 30 years. They recently made a $15 million gift to update, enhance, and beautify the HUC-JIR campus in Jerusalem – the largest single gift made by Taube Philanthropies to a Jewish institution, and the largest single gift received by HUC.

The campus renovation broke ground in June of 2016, at which time the campus was renamed the Taube Family Campus at HUC-JIR.

“HUC is doing cutting-edge work in training the next generation of Reform rabbis, cantors, educators, and nonprofit leaders, which is essential to ensuring Jewish life and culture continues to thrive in generations to come,” said Tad Taube, Founder and Chairman of Taube Philanthropies.

The event was both celebratory and commemorative, following the recent death of HUC president Rabbi Aaron Panken, whose lifetime of work on behalf of the Reform tradition and the Jewish people was highlighted.

Taube continued, “Conversations with Rabbi Aaron Panken led us to commit this gift to HUC to enhance the Jerusalem campus. Through these discussions, Rabbi Panken became my dear friend. We were excited to see our shared vision of a state-of-the-art Jerusalem campus become reality. Standing here and contemplating the completion of our project without him was not something I could have ever imagined.”

The Foundation also announced a new Aaron Panken Merit Scholarship, which it is funding through a $150,000 gift over three years. It will provide six rabbinical students who have demonstrated academic excellence the opportunity to study at HUC’s Los Angeles campus.

Additional honorees included Arthur Greenberg, a founding partner at Los Angeles-based law firm Greenberg Glusker, and a special commendation was awarded to Lee Wunsch, the former President and CEO of the Jewish Federation of Greater Houston.

Photos from the event are available here.